I am 7th of 9 children born to Cmd. Sgt. Maj. Felicisimo & Mrs. Luz Soriano Pilola. Four were born in the Philippines where my parents are from. Another brother & sister were born in New York when my dad was stationed at Ft. Hamilton. I was born in Ft. Dix, NJ on Dec. 3, 1958. We joined my father in Alaska June 1959 where my brother Pat was born. In 1963 Ft. Polk opened in Louisiana and my father moved us to Leesville, LA outside the base. My brother Michael was born there. He was a Down's Syndrome baby whom we loved very much but unfortunately had leukemia and died two and a half years later. This experience helped us not to take each other for granted.

I was originally sent to a St. Michael Catholic School in Leesville but it closed due to the small Catholic population. In the 4th grade I entered the public school system. I graduated from Leesville High School 1976 as one of 4 valedictorians from a class of 235. I originally majored in Pre-Medicine at Louisiana State University before entering St. Joseph Seminary College. I graduated from the Seminary in 1980. The following Fall semester I was sent to Catholic University in Washington, D.C. for graduate studies in Theology. Eventually I transferred to Notre Dame Seminary in New Orleans after joining the Houma-Thibodaux Diocese. I was ordained a Transitional Deacon in Jan. 1987 and was ordained a priest in May 1987.

My introduction into the Diocese came from my best friends in the seminary. One was from Houma in St. Bernadette parish and the other was from Bourg in St. Ann parish. Both of my friends came from large families like mine. They were always so hospitable and I felt adopted right away. The other parishes I have served since ordination are St. Joseph Co-Cathedral, Holy Rosary in Larose, Sacred Heart in Cut Off, St. Andrew in Amelia, St. Genevieve in Thibodaux, Holy Savior in Lockport, Holy Family in Dulac, St. Eloi in Bayou Dularge, St. Thomas Aquinas on Nicholls State University, St. Francis de Sales Cathedral, Holy Cross & Sacred Heart in Morgan City. I was made Liason for the Deaf Community because of my ability in American Sign Language. I have also served on the Diocesan Cursillo Secretariat Board as well as a Spiritual Director for many weekend retreats. I had the opportunity to write the "Inner Groove" article for six and a half years at the end of which I was nominated for "Who's Who in American Journalism" 1996-97. I have also served as a regular celebrant for the Diocesan Hispanic Ministry. I also have been a regular Pastoral Counselor for Teenage Alcoholic and Drug Addicts as well as adult members of the Alcoholics Anonymous community. I was Vocation Director for the Diocese for three years. In addition, I have been an Adjunct Professor of Formation at St. Joseph Seminary College and a Spiritual Director for the Seminarians for over 12 years.

If you couldn't tell, I love my life as a Diocesan Priest, but, most of all, I seek God's Will in my life and daily strive to listen & follow the movement of the Spirit as He leads me. I am constantly amazed at the wonderful people God has blessed me with and I strive to love them as God Wills. While I do not have any blood family here in the Diocese, I am proud to be Parrain to 28 Godchildren of whom I am only blood related to two of them. Needless to say, my approach to priestly ministry is family-oriented within the context of the Greater Catholic Church. I look forward to serving the rest of my years here at Maria Immaculata Parish. 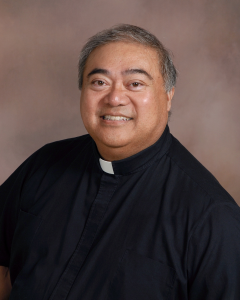